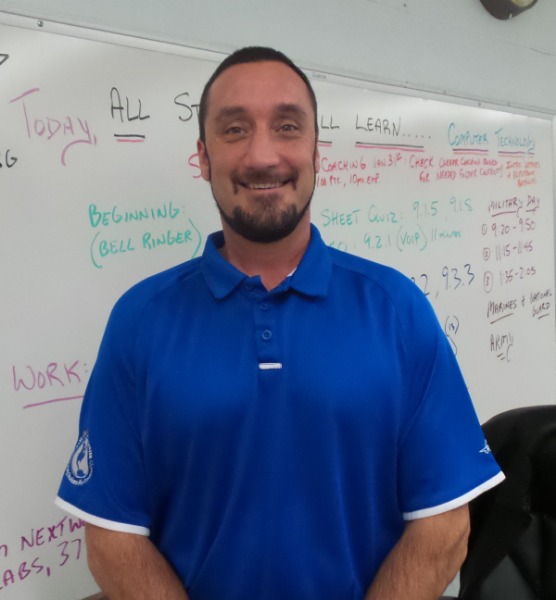 Shawn Balling, KACC's Computer Technology Instructor has been a member of our Team KACC for many years.  He began teaching at KACC in August of 2002.  He has remained very engaged in continuing to learn as technology has advanced and has brought professional level certification and dual credit opportunities to his classroom.

Since he was a child, Mr. Balling says he  has loved working and playing with electronics. All throughout high school, he took whatever classes he found to help him best understand the electronic world.

After high school, Mr. Balling joined the Military.  While in the Navy, Mr. Balling was able to continue working in electronics and received quite a bit of training and experience. Balling was in the Navy for a total of five years and traveled to many places. For 18 months, Mr. Balling was stationed in San Francisco for electronics training. After his stay in San Francisco, he was transferred to San Diego his next 2 years of service. Then, he went way up north to Adak, Alaska for 18 months. All in all, Mr. Balling says  "It was an excellent,  learning experience all for free."  When he had completed his service, he continued, "It was time to come back home."

Mr. Balling leads his students into an in-depth look at the computer and its parts for knowledge and troubleshooting purposes. He also teaches networking and the world-wide web. His program includes college-level curriculum embedded throughout the entire school year. His students are well prepared move on to college or accept entry-level positions.

"The best thing about being a teacher," said Mr. Balling "Is to witness the success of his students in the classroom. By the time students finish the two-year computer technology program at KACC, they typically have a great base of knowledge of computers, their inner works and networking.

Occasionally, he sees his students come back to KACC just to say hello. He says that knowing and seeing how they've grown with the education he or she received, is really something Mr. Balling is very proud of.  He oftentimes shares his former student success stories with the newcomers at KACC. The only thing Mr. Balling says he doesn't appreciate is when a student is lazy or doesn't try.

Mr. Balling, like many teachers at KACC, know that our students, when committed to working hard toward their career, can reap huge rewards as they go off into their future.

Mr. Balling and his abilities as a teacher fits nicely with KACC's motto - Preparing Students For Tomorrow!