How the Ship Sailed to Springfield 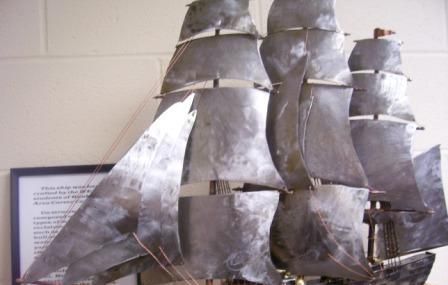 Goodness, how beautiful a weld can be! Alec Mueller Bradley-Bourbonnais High School and Jake Schafer, Herscher High School, tell their story of how designing this ship took them from the halls of KACC to the halls of the Illinois State Legislature. 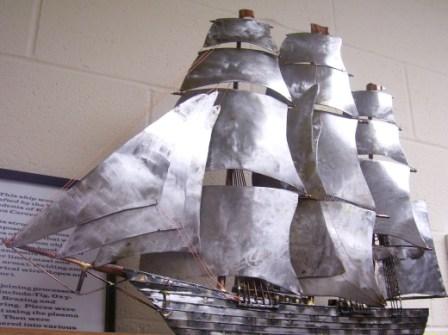 It all started when our instructor, Mr. Spangler asked us to make a model of an old ship. There was a plastic version of the ship to use as a visual guide.  Being second-year students, we were positive we could handle a task such as this.

The ship itself is made from an old car hood.  The roping is copper wire which has been carefully twisted and placed between the sails.

With only three weeks to complete the project, we had to get a move on.  For starters, we made wooden templates of the sails.  After the templates were finished, the next step was to cut the sails out of the hood.  For this to happen, we used a process known as plasma cutting.  By setting the templates on the hood, we were able to get an accurate sail cut out.  Once cut, we were able to shape the metal.

For the actual body of the ship, we used straight metal and slightly bent them.  The masts were made out of copper tubes, to which we then affixed more of the copper wire roping.

We were certainly happy with our final project.  Mr. Spangler made sure it was put in the display case in our main hallway so fellow students could admire the craftsmanship.  Not only did the students of KACC enjoy it, so did the staff.  Our Assistant Principal, Mr. Matt Kelley, liked the ship so much he suggested to the Director, Mr. Don Fay, that we travel to Springfield to give a speech and represent the Career Center for the Illinois Association of Career and Technical Education's Legislative Day.  Mr. Fay agreed and made sure he presented the ship to the Executive Board as well.

The experience is one to remember.  Not only did we meet legislative leaders from our district and the state, we were able to say a few words, make an introduction of State Representative Dugan, and be brought on to the Senate floor by State Senator Toi Hutchinson.

We are both very thankful for the financial support and privilege of having the chance to express ourselves regarding what we enjoy doing, not to mention right there in front of State legislators.

Without KACC, we don't think we would have had the same level of ambition throughout our high school years.  The welding process we have learned these past two years will follow us on to college next year, and as we further our education throughout our lives, knowing full-well, it started at the Kankakee Area Career Center.