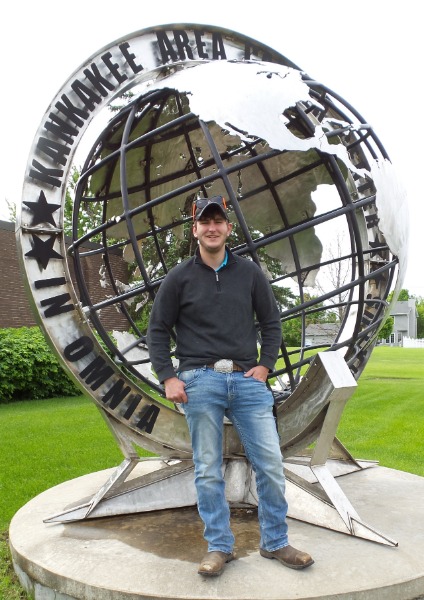 The last day of the 2018-2019 school year was made extra-special with a visit from Dalton Grimes.  Dalton, a 2018 Graduate from KACC's Welding Technology Program and Watseka High School returned to KACC for a quick visit.

One of the reasons for Dalton stopping by was to let us know how much his experience at KACC helped prepare him for the next step in his path to a career.  Specifically, Dalton spoke about how helpful his work with the Career Coaches were in developing his portfolio.  He has already utilized it.  He keeps his resume and cover letter up to date and is ready to begin his job search.  He's even already working on his CDL.

Dalton also thanked KACC for the scholarship money he was awarded. He said it really came in handy to pay some of his housing costs.  Housing, he said, is expensive.

Although Dalton's career doesn't specifically line up to his welding classes at KACC, he has utilized those skill sets.  As soon as one of his program instructors found out he had welding experience, he was tapped to some repair welding and fabrication.  "It's nice that I can be helpful in this way," said Dalton.

On July 19th, Dalton will graduate with his Lineman's Certification.  He chose not to seek an Associate's Degree because he was not interested in doing the general education coursework and stuck to Lineman programs.  He had solid A's last term.  His school has brought in several companies looking to hire linemen.  Northwest Iowa Community College has close to 100% job placement rate.

All of us at KACC look forward to hearing where Dalton accepts employment.  No matter where, this fine young man will do very well.  He is an exceptional example of fulfilling our motto at KACC - Preparing Students for Tomorrow.  Dalton is well-prepared.

Note: Pages will open in a new browser window. External pages are not endorsed by Kankakee Area Career Center.